It hasn’t been the greatest September, and apart from a change in my human surroundings there’s really nothing much going on, at least not worth mentioning on here anyway. To distract myself from all the movies I was looking forward to watching as soon as I possibly could and the fact that almost all of them played at TIFF, I reviewed a movie that wasn’t even on my list. My heartbreak in terms of missing out on TIFF this year was worse than ever and I resorted to living vicariously through many a critics’ twitter feeds. You could say this was a coping mechanism and a poor one because it did nothing but reinstate that my heart is always, and always tied up in writing and my academia has unscathingly beat it in terms of priority.

A quick disclaimer: I haven’t read the book. Even if I had I’m pretty sure my review would be mostly objective and have maybe one paragraph seamlessly merging both and stating if they worked independently or not. I’m really that easygoing.

As always a few technical details before we jump right in. White Bird In A Blizzard, directed by Gregg Araki and based on the book by Laura Kasishke, starring the likes of Shailene Woodley, Eva Green and Christopher Meloni. I went into the movie completely blind about the plot and as much as I hoped that it would surprise and thrill me, it did and didn’t.

In the year 1988, a single child named Kat (Shailene Woodley) is left on her own devices when her mother (Eva Green) mysteriously disappears. Kat’s father (Christopher Meloni) visibly taken aback with this disappearance does everything he needs to co-operate with the search for his wife but to no effect. Kat’s life takes a different twist and the lack of her boyfriend’s interest in her further fuels her discontent. I can’t quite put my finger on any adjectives that can fittingly justify Kat. I mean I can name a few but they are ultimately contradicted and this is why I never related to Kat at all, despite the dysfunctional family et al. Kat’s character development is flawed and confusing. I feel like either the script writers completely misinterpreted what it’s like to be 18 and hung out to dry with no sense of direction to your life, the mother you may or may not have respected or looked up to bailed on you or the director purposely aimed at this kind of shoddy representation. This is what confuses me to a point of extreme frustration and the reason I write this is to figure out what I feel about this movie. We know now that I didn’t enjoy it but we’re slowly getting to why I didn’t.

Not knowing the genre of the movie three-quarters into it I felt as dazed as Kat did in the frigid nightmares she had about her mother asking for help amid a snowstorm. Kat’s therapist concludes that dreams don’t mean anything and Kat quickly starts to feel disdain for the therapist. I will say if I was paying to talk to someone about my feelings, I wouldn’t necessarily be hoping to uncover a divine interpretation of my thoughts or feelings but Kat’s therapist might be the worst representation of a person doing a job they weren’t ever meant to do. The only other therapist I can think of that pissed me off so much was the one in Donnie Darko. Why am I even glossing over these trivialities? Maybe because there were so many angles to this story that felt forced. I can see how a novella might have essentially brought out more to these scenes that on the reel felt like a complete drag.

What can I say about Kat’s boyfriend though and how much he resembled guys that some of my closest friends dated. It’s eerie. The grungy, dumb as a pole, messy and unkempt hair a given kind of a boy that girls like Kat put up with for reasons that are the biggest secret in the world, in my opinion. So, Kat goes from being so into Phil to really just wanting someone she can go to bed with – that someone being the older detective on her mom’s case. Kat’s character up to this point seems completely fine that her mother may never be found. She watches her dad continue to be the man he used to be and moves on to college. On coming home she finds that he has a girlfriend and takes no objection to it whatsoever. 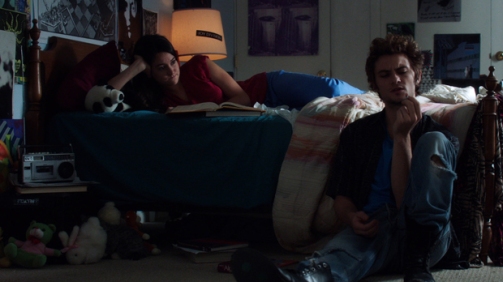 So in keeping this review spoiler free, I can only say this much that at the stage when Kat really starts to show signs that she cares her mother is gone, that she needs closure you have no connection with her at this point at all. All of the last fifteen minutes or so are rushed, dramatic, supposed to induce levels of thrill and suspense moments. The only thing that climax did for me is genuinely catch me by surprise.

I will diverge here just a bit to explain why this “being caught by surprise” is something so important to me. I know someone who watches movies and anime and loves the subtleties, the story arcs, the little details and the idea behind the bigger pictures almost the same way I perceive them. So when we watch anything together, it’s usually a fun ride. However, he feels like he’s reached this point where he has cracked the code behind every kind of movie there is. This for me feels like a very impressive feat. I know, for a fact, that I’m no where close to that level. More importantly, he makes me wonder, do I want to be? Halfway or even sooner through a film, he’s usually got a good grasp of the possibilities, I daresay he’s managed to shortlist the one outcome, too. Whereas I on the other hand, leaning ahead, face in my palms, tapping feet, am way too engrossed to even bother thinking ahead afraid I’ll overlook something. So when a curveball hits the screen I am usually smack in the path and I’ll tell you this, I wouldn’t have it any other way. I love that I can still enjoy something without already knowing how it might end, that my mind is not (yet) attuned to pick up things that fast and thereby ruin my viewing experience. I remember initially feeling a little less about not being able to grasp these things as easily as he could, but then I wouldn’t have this blog and I wouldn’t ever need to write about a movie in order to figure it out. This lacking is a blessing.

I do not suggest White Bird In A Blizzard primarily because the movie made me uncomfortable and sort of queasy and I am still not sure why. It’s slow and far from compelling and even for the suspense genre that I had no idea about until an hour into it, White Bird In A Blizzard is odd, gloomy and confusing in the way that it doesn’t leave your mind for days after you’ve watched it. No one really needs that.

Something happened here a while ago

Or take a random pick:

Can’t find what you’re looking for? I’m as lost as you. Search here: